Some weeks ago I made enquiries with our council officers about the official history of the local authority and in particular whether there were any easily accessible records on the people who once worked in and occupied the corridors of power in our town hall.

Unfortunately, there doesn’t seem to be succinct history of the local authority but the archives do hold copies of all the Council minutes, committee papers and local newspapers which can give a flavour of council business and the personalities involved.

My enquiries were made last year around the time that the Equality and Diversity Advisory Panel was carrying out its work to refresh the borough’s equality and diversity strategy. Naturally, when I met with our resident historian and manager at Redbridge Museum in Redbridge Central Library, to learn more about our borough’s heritage, my line of questioning ended with: “so, who was elected as the borough’s first BME Councillor?”

I was kindly sent a copy of the obituary of Cllr Ardeshir Kapadia (1864-1927) which appeared in the Ilford Recorder shortly after his death and separately a photograph showing Ilford Urban District Council members at an outing during the First World War. 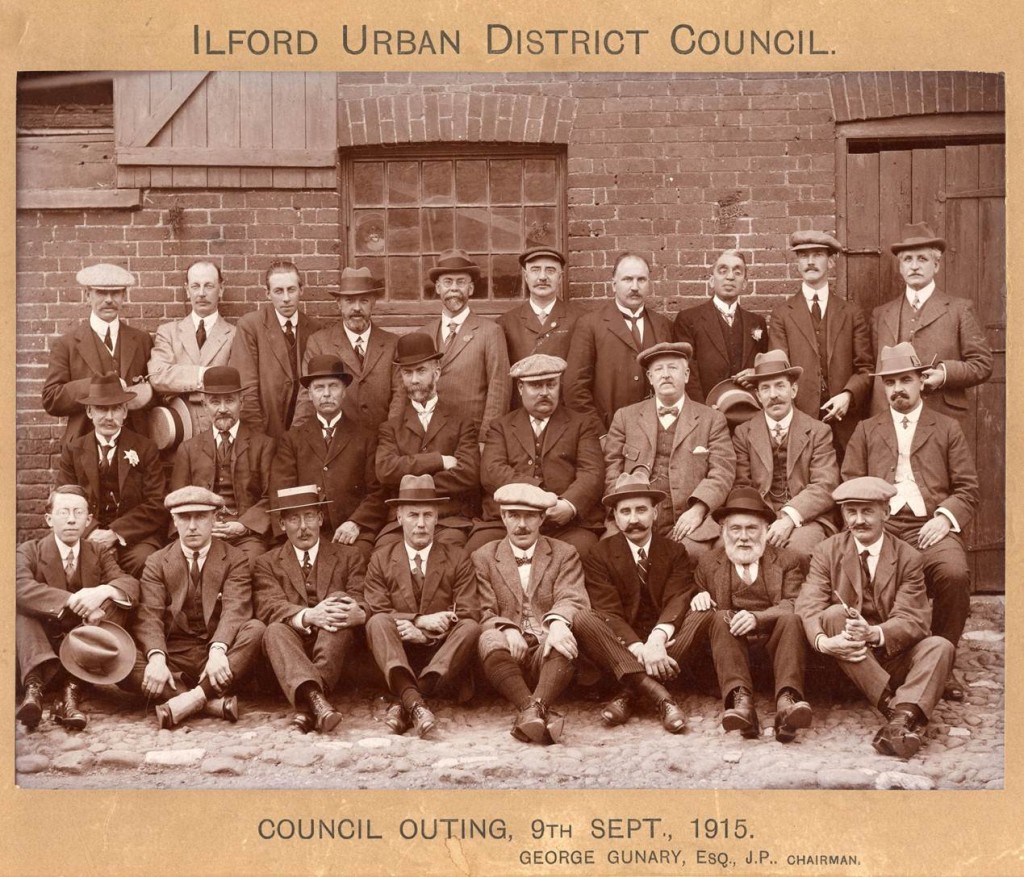 (Cllr Kapadia can be seen in the back row, third from right as you look at it.)

Cllr Kapadia was born to a Parsee merchant in Bombay, India, and was sent to the United Kingdom to study English law. Whilst living in Endsleigh Garden he represented a seat in North Hainault which was then part of Ilford Urban District Council. Amongst other details of his professional work as a consulting barrister, his obituary makes specific mention of his contributions to helping found Pioneer Market which stood until not too long ago on the site now occupied by Pioneer Point.

Whilst there is still plenty more to be discovered about the life of Cllr Kapadia, we can confidently say that he was one of the first individuals from local BME communities to enter public life and add to our borough’s rich history. 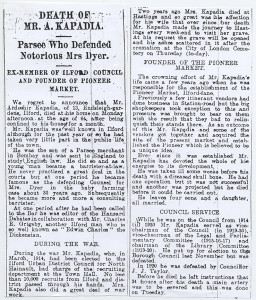 DEATH OF MR. A. KAPADIA.

EX-MEMBER OF ILFORD COUNCIL AND FOUNDER OF PIONEER MARKET.

We regret to announce that Mr Ardeshir Kapadia, of 13, Endsleigh-Gardens, Ilford, died at his home on Monday afternoon at the age of 64, after being confined to his house for a month.

Mr. Kapadia was well known in Ilford although for the past year os so he had taken very little part in the public life of the town.

He was the son of a Parsee merchant in Bombay and was sent to England to study English law. He did so and as a young man became a barrister-at-law. He never practised a great deal in the courts but at one period he became famous as the defending Counsel for Mrs. Dyer in the baby farming case about 30 years ago. Subsequently he became more and more a consulting barrister.

At one period after he had been called to the Bar he was editor of the Hansard Debates in collaboration with Mr. Charles E. Grigsby, another Ilford man who is so well known as “Edwin Charles” the Dickensian.

During the war Mr. Kapadia, who, in March, 1914, had been elected to the Ilford Urban District Council for North Hainault, had charge of the recruiting department at the Town Hall. No less than 10,000 recruits from Ilford and district passed through his hands. Mrs. Kapadia also did a great deal of war work.

Two years ago Mrs. Kapadia died at Hastings and so great was this affection for his wife that ever since her death Mr. Kapadia made the journey to Hastings every week-end to visit her grave. At his request the grave will be opened and his ahed scattered in it after the cremation at the City of London Cemetery on Thursday (to-day).

FOUNDER OF THE PIONEER MARKET

The crowning effort of Mr. Kapadia’s life came a few years ago when he was responsible for the establishment of the Pioneer Market, Ilford-lane.

Previously a few itinerant vendors had done business in Station-road but the big shopkeepers took exception to this and pressure was brought to bear on them with the result that they had to relinquish their stands there. As an outcome of this Mr. Kapadia and some of the vendors got together and acquired the site of the present market and established the Pioneer which is believed to be a unique idea.

Ever since it was established Mr. Kapadia has devoted the whole of his energies to its development.

He was taken ill some weeks before his death with a diseased skull bone. He had one operation but it was not successful and another was projected but he died before it could be carried out.

He leaves four sons and a daughter, all married.

In 1920 he was defeated by Councillor J.J. Taylor.

Before he died he left instructions that 24 hours after his death a main artery was to be severed and this was done on Tuesday.

Redbridge Museum has confirmed that Endsleigh Gardens was apart of Cranbrook ward in 1918 and that the Kapadia family were living there at the time. Members of the Kapadia family are listed on the electoral register (pictured below).