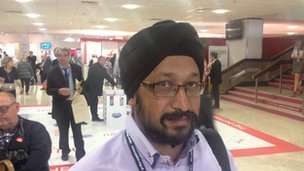 I am delighted to learn that Rupinder Singh has won Coventry’s Lower Stoke by-election for the Labour Party.

Rupinder Singh, 49, a dad of three who works in IT, won the election in the Lower Stoke ward with 1,237 votes with 15 percent of the electorate choosing to cast their vote.

Despite the low turnout he beat off rivals Eliane Francoise Yebkal from the Conservative party who came second with 344 votes, UK Independence Party’s Harjinder Singh Sehmi coming in third with 290 votes, Aimee Challenor from the Green Party was fourth with 165 votes and Christopher Mark Glenn for the Liberal Democrats last with only 124 votes.

In recent years I have had the pleasure of meeting Rupinder at several political conferences and demonstrations and I can say with confidence that his residents are lucky to have an activist like him to represent their interests on the council.