I recently wrote about the unpleasant Christmas surprise my family received when our family car was vandalised by an unknown person.

The damage to the passenger side wing-mirror left us with a higher than expected repair bill of £180 but for me that was relatively small cost in contrast to the feeling  of anxiety and insecurity that it caused my parents.

I am again very thankful to the team based at Ilford Police Station for responding quickly to my report and for reviewing all the items of evidence presented to them. I am also very grateful to Ajay Nair at the Ilford Recorder newspaper who saw the CCTV footage I posted on Twitter and kindly ran a short article highlighting this particular incident. Unfortunately, Ajay’s article attracted a small number of negative comments from individuals who seemed to believe that my role as a Councillor somehow merited me being a target for insinuations and slurs. However, despite some of the lazy attacks and accusations of ‘crass self-promotion’ led by members of the local Conservative Party (sorry to make this matter partisan but it is important that readers of this blog are highlighted to the political motives behind the comments) there have been some very sympathetic messages from members of the public which recognise that theft and vandalism of motor vehicles is a genuine problem in some of our neighbourhoods which needs to be addressed.

I have also received communication from other victims over whatsapp, twitter and e-mail. I am saddened to learn that in the period between Christmas day and the new year there have been other incidents of vandalism and theft of motor vehicles. 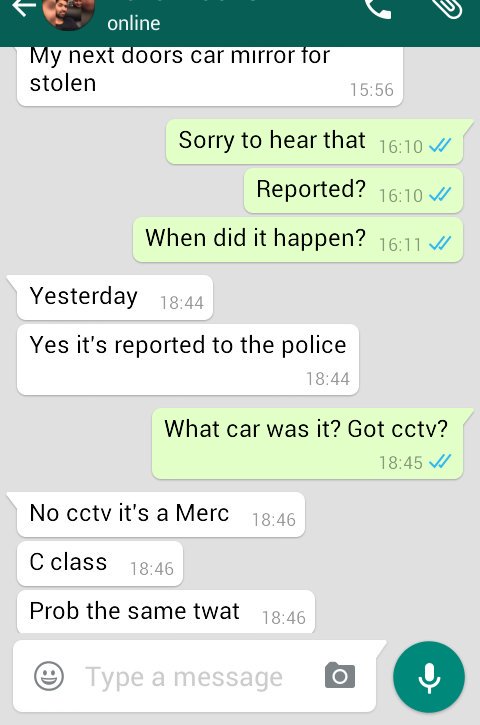 One of the victims was The Reverend Father Gareth Jones of St Mary’s Church. In a short conversation with me on Twitter he wrote:

@vazsingh someone took mine the other night – though my car is not luxury. People steeling to order in Redbridge again?

@vazsingh yes, outside my Vicarage. I’m afraid I stopped reporting these kinds of things due to the disdain with which the police treat it.

Over the weekend I also received an anonymous e-mail from a disabled Muslim woman who wrote:

The three thieves, all [details omitted], smashed the car door lock, two sped off in their own car and the third went off with my van which was parked in my driveway.

It makes no sense why my van was taken. It was second hand and a 2004 model, so it would not have had a high value.

But I am gutted because I depended on my van. It was used for transporting my belongings from my previous place as well as moving some my stored items to my current accommodation.

I have multiple health problems and recently had surgery. My accommodation has been assessed by an Occupational Therapist as not being suitable for me. The sky high rent that landlords demand means that I cannot afford alternative accommodation. I am struggling; facing a bleak future as I’m stuck in limbo and with no help from the Council.

But now thanks to these three thieves, I have no transport to move my belongings out of my current accommodation in the future, or to collect the remaining of my furniture and furnishings which are stored with friends (outside London).

And I am having bigger panic attacks and anxiety – scared that they might target my home now.

I believe that nobody in our borough should have to live in fear of becoming a victim of crime or of reporting crime. However, I understand that it is human nature to feel scared when somebody has deliberately caused damaged or violated personal space and trust. It is therefore incumbent upon all of us to provide the reassurance and support to those who require help from the police.

I would urge anybody with information on any of the incidents highlighted in this article to contact Ilford Police on 101 (non-emergency number) or through their website.

Edit 05/01/2016 – Yesterday in my absence a near neighbour left a message saying that his car had also been vandalised in the same manner (theft of glass side mirror) as the recent string of crimes. I will be asking the Safer Neighbourhoods Team (SNT) to increase their patrolling and will be again raising these cases with the local police. If you have recently been a victim of a similar crime then please let me know.

Edit 23/01/2016 – I have learned of another incident of theft in which the driver side mirror was removed in the same manner as described above. I am told by the resident that this incident took place little under three weeks ago.